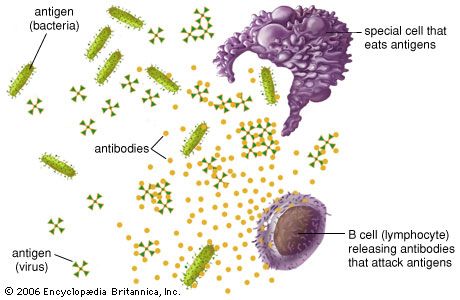 Examples include parts or substances made by viruses or microorganisms (such as bacteria and protozoa), as well as substances in snake venom, certain proteins in food, and components of other people’s serum and red blood cells. Autoantigens, on the other hand, originate within the body. Normally, the body is able to distinguish self from foreign, but in people with autoimmune disorders, normal body substances provoke an immune response that leads to the generation of autoantibodies. An antigen that induces an immune response, that is, stimulates lymphocytes to produce antibodies or to attack the antigen directly, is called an immunogen.

On the surface of antigens are regions, called antigenic determinants, that engage and bind to receptor molecules of complementary structure on the surface of lymphocytes. The binding of lymphocyte receptors to antigen surface molecules stimulates lymphocytes to multiply and initiate an immune response, including the production of antibodies, the activation of cytotoxic cells, or both, against the antigen. The amount of antibody formed in response to stimulation depends on the type and amount of antigen involved, the route of entry into the body, and the individual characteristics of the host.

At the molecular level, an antigen is characterized by its ability to “bind” to the antigen-binding site of an antibody. Antibodies tend to discriminate between specific molecular structures that are presented on the surface of the antigen. Antigens are usually proteins, peptides, or polysaccharides. This includes parts (shells, capsules, cell walls, flagella, fibres, and toxins) of bacteria, viruses, and other microorganisms. Lipids and nucleic acids are antigenic only when combined with proteins and polysaccharides.

For example, the combination of lipids and polysaccharides are lipopolysaccharides (LPS), which are the main component of gram-negative bacterial endotoxin. LPS forms the cell wall of gram-negative bacteria and elicits a powerful immune response when bound. Cells present their immunogenic antigens to the immune system through a major histocompatibility molecule (MHC). Depending on the antigen presented and the type of histocompatibility molecule, various types of immune cells can be activated by an antigen.

Antigens have several interacting structural components that can bind to different classes of antibodies. Each of these different structural components is considered an epitope, also called an antigenic determinant. Therefore, most antigens have the potential to bind to several different antibodies, each of which is specific to a particular epitope. The antigen-binding receptor on an antibody is called a paratope and is specific for the epitope of the antigen. Using the “lock and key” metaphor, the antigen itself can be viewed as a chain of keys (any epitope is a “key”), each of which can match a different lock. 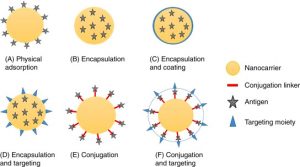 Endogenous antigens are those that have been generated within previously normal cells as a result of normal cellular metabolism or due to intracellular viral or bacterial infection (which changes cells from within in order to reproduce). The fragments are then presented on the surface of infected cells in complex with MHC class I molecules.

Autoantigens are normal “self” proteins or complexes of proteins or nucleic acids that are attacked by the host’s immune system and cause autoimmune disease. These antigens, under normal conditions, should not be the target of the immune system, but due mainly to genetic and environmental factors, the normal immunological tolerance for such antigen has been lost.

These antigens are presented by MHC I or MHC II molecules on the surface of tumour cells. These antigens result from a tumour-specific mutation during the malignant transformation of normal cells into cancer cells. Despite expressing this antigen, many tumours have evolved ways to evade antigen recognition and clearance by the immune system. 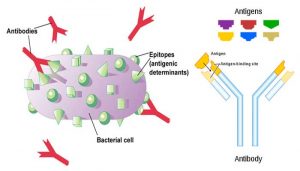 Antigen binding site of an antibody: Antigen binding sites can recognize different epitopes on an antigen. In order for an antigen-presenting cell (APC) to present an antigen to a naive T cell, it must first be processed so that it can be recognized by the T cell receptor. This occurs within an APC that engulfs an antigen and then digests it through the fragmentation (proteolysis) of the antigen protein, the association of the fragments with the MHC molecules and the expression of the peptide-MHC molecules on the cell surface.

There, they are recognized by the T cell receptor on a T cell during antigen presentation. MHC molecules must move between the cell membrane and the cytoplasm for antigen processing to occur properly. However, the pathway leading to the association of protein fragments with MHC molecules differs between MHC class I and class II, which are presented to cytotoxic or helper T cells, respectively. There are two different pathways for antigen processing: